Ode to a sacred river: Why the Namami Gange Programme is different from previous efforts to clean Ganga – Nation News

NO other river in India evokes as much awe or is surrounded with as much religious fervour as the mighty Ganga. The river begins its 2,525 km journey from the mouth of the Gangotri and ends up at the Gangasagar in West Bengal. The river covers 26 per cent of the country’s landmass, straddling a mammoth area of 8.6 lakh square kilometres. It flows through five states and has six other states in its basin. The Ganga and its tributaries contribute as much as 28 per cent to India’s water resources. More than 43 per cent, or 500 million people, of India’s population, depends on it and the Gangetic delta is considered the food bowl of the country. There are 97 major urban centres and 4,457 villages along the river’s main stem. And therein lies the problem. Over the decades, these habitations have indiscriminately all­owed their sewage and industrial effluents to flow into the river, causing its water to become highly polluted and, on many stretches, destroying aquatic life. 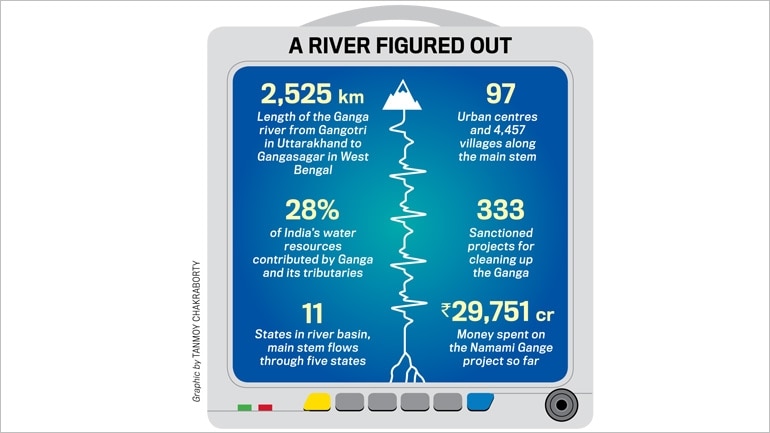 There is every reason to be cynical when the term Clean Ganga is bandied about. The first attempt to clean the highly polluted river was launched by the then prime minister Rajiv Gandhi in 1986, but a huge gap emerged between what was being promised and what was actually being practised. Officials who handled the episodic missions to clean the Ganga said their main flaw was that they were half-hearted and piecemeal. There was little coordination between the Centre, states and local bodies and a complete disregard for the river’s carrying capacity. Between 1985 and 2015, only Rs 4,000 crore was spent mainly to set up sewage treatment plants. Delays in project execution were the norm, apart from a lack of clarity on basin-level issues and inadequate technology interventions. When Prime Minister Narendra Modi came to power in 2014, he brought about a sea change in the approach. The effort to clean the Ganga, given that it is a river the Hindus revere, was part of the campaign promise of the Bharatiya Janata Party (BJP). Modi worked to ensure that the programme would be far more successful than the previous attempts. While announcing the Namami Gange Programme (NGP), he set up a National Ganga Council as the overseeing authority, which he would head. The National Mission for Clean Ganga (NMCG) was formed as the implementing agency. The Modi government notified that the NMCG would be treated as an authority with statutory powers under the Environment (Protection) Act, 1986, giving it bureaucratic autonomy and regulatory powers to execute the mission in coordination with the respective state governments. The prime minister then sanctioned Rs 20,000 crore for five years or five times the amount committed in the past 35 years, ensuring that the hundred per cent Central funding of key projects would overcome the states’ reluctance to cough up money.

The NMCG went about its task in a holistic manner, dividing its mission into four major parts: Nirmal Ganga (cleaning up pollution), Aviral Ganga (ensuring ecology and flow), Jan Ganga (public participation in the clean-up efforts) and Gyan Ganga (promoting research on policies and management of the river). Unlike in the past, the focus is on rejuvenating the entire main stem rather than a few cities on its banks. It also emphasised on regenerating and conserving the aquatic and riparian biodiversity of the river basin. Of great help was the fact that seven IITs (Indian Institutes of Technology) had prepared a detailed basin management plan and plenty of fieldwork, including estimating the amount of sewage generated by major urban and rural centres along its banks, had been done even before the various projects were sanctioned. All this was to ensure that the implementation was done on a scientific and time-bound basis.

Rajiv Ranjan Mishra, director-general of the NMCG, says that several major policy decisions were taken to overcome the problems encountered earlier. These included a hybrid annuity model (HAM) for sewerage infrastructure projects where operation and maintenance were made an integral part of the projects, making space for public-private partnerships as is being done for the national highway projects. The government would pay 40 per cent of the capital expenditure upfront and the remaining 60 per cent would be in annuity. This was a paradigm shift along with the norm that each city would have only one operator who would get the project and be responsible for both its construction and maintenance for 15 years. “This improved the governance and accountability in wastewater management apart from the quality of the work, as the agency knew that it had to ensure its smooth operation and maintenance for a long duration,” Mishra says.

Ensuring that industrial effluents are not indiscriminately dumped into the Ganga but are properly treated has been another focus of the NMCG. Apart from local regulators, the authority carries out its own annual inspection to ensure that industries along the Ganga are complying with norms. That led to a dramatic improvement and, as the case studies in the following pages show, many stretches of the river have been revived to the extent that they can support aquatic life. Another unique approach is to ensure that hydroelectric projects release the water on time to avoid any discontinuity in the river. Care has also been taken to maintain the wetlands in the basin rather than just the river itself so that the groundwater in the region improves and biodiversity begins to flourish. The return of the dolphin in large numbers is a good sign that the river rejuvenation is on track. To ensure people’s connect and involvement in the river, riverfront boulevards are being developed so that the locals can go for walks and other forms of recreation. “We have worked in a focused manner and aggressively pursued the mission and it is showing results,” says Mishra. The NMCG has sanctioned a total of 333 projects at a cost of Rs 29,578 crore, of which 142 projects have been completed. While the accompanying chart shows how much has been done (see The Ganga Action Plan), Mishra acknowledges that there is still a long way to go. What is significant, however, is the zest and zeal to get the job done well and on time.