India’s foreign trade policy can be divided into three phases: the 1950-75 period that saw tight controls, 1976-91 which witnessed some liberalisation, particularly the last 5-7 years, and 1992 onwards which saw the full onset of liberalisation. Although the government had introduced quantitative import controls in May 1940 to conserve foreign exchange during World War II, starting 1947 the government introduced restrictions on the rate at which foreign exchange could be run down. The policies those days were a mix of liberalisation and tighter controls, says economist Arvind Panagariya in a Brookings Institute research paper in 2004.

Following a balance-of-payments crisis in 1956-57, India went back to comprehensive import controls. The principle of indigenous availability prevailed, so foreign exchange was denied to import a product if domestic substitutes were available. A key policy shift came in 1966, when India devalued the rupee from 4.7 to 7.5 to the dollar and liberalised import licensing, tariffs and export subsidies. After a brief reversal of this process in the late 1960s and early 1970s, liberalisation returned in the late 1970s. The new phase began in 1976 with the reintroduction of the Open General Licensing (OGL) list. Hundreds of items were subsequently added to the OGL for imports. By 1990, 31 sectors had been freed from industrial licensing.

Starting with the July 1991 budget, India saw a clear switch to an outward-oriented, market-based economy. The July 1991 reforms did away with import licensing on all but a handful of intermediate inputs and capital goods. The government also devalued the rupee by 22 per cent, from Rs 21.2 to a dollar to Rs 25.8. With liberalisation, trade got a big boost. India’s share in world exports of goods and services, which had declined from 2 per cent at Independence to 0.5 per cent by the mid-1980s, bounced back to 0.8 per cent by 2002. India’s share of world services trade more than quadrupled from 0.5 per cent in 1995 to 3.5 per cent in 2018; the country has become a major exporter of business services, notably in the information, communication and technology sectors. However, exports of goods have displayed mixed results, notes an OECD (Organisation for Economic Co-operation and Development) report in February 2020. India has gained market shares for some skill- and capital-intensive goods, including pharmaceuticals and refined oil. However, performance in exporting textiles, leather and agricultural products has disappointed. 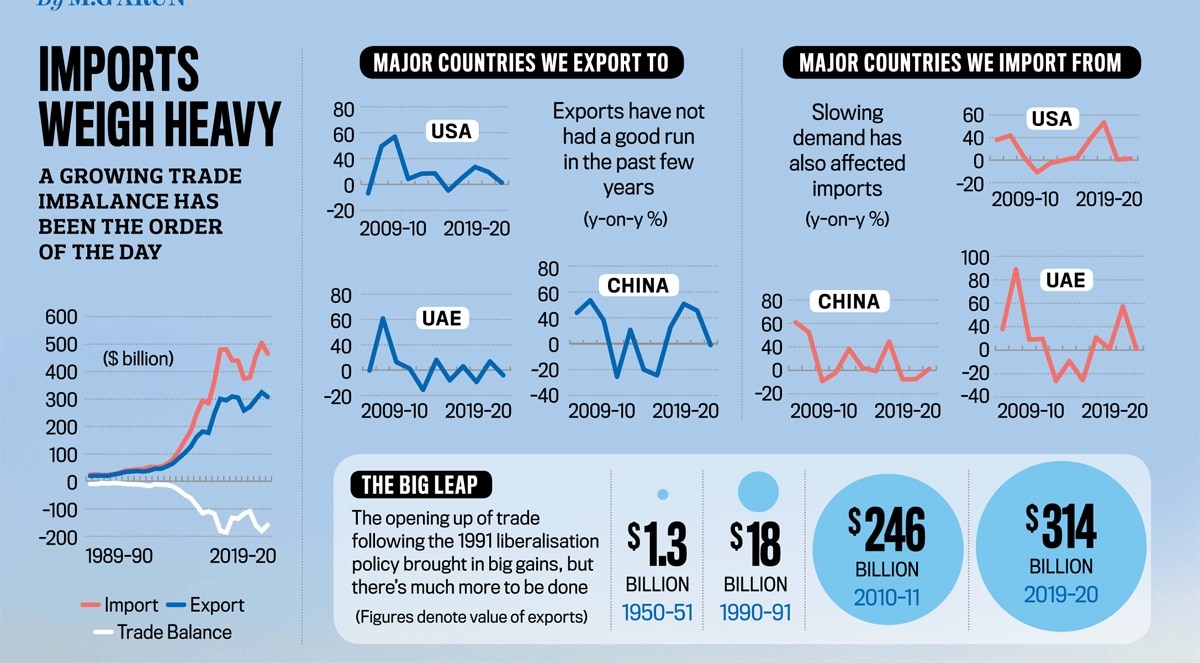 What ails our exports? Stringent labour regulations create incentives for firms to stay small, making it diff­icult to exploit scale economies, says OECD. High electricity prices and transport infrastructure bottlenecks hamper the competitiveness of manufacturing goods. Issues related to land acquisition, coupled with relatively high financing costs, also affect India’s competitiveness. Meanwhile, higher import tariffs since 2017 often lead to costly imports of intermediate products. This, when not fully compensated, can hurt exporters of finished goods made using those intermediates. The need of the hour is to modernise land and labour regulations, address infrastructure bottlenecks and open up the services sector further to trade and investment. In the mid-term review of Foreign Trade Policy 2015-20, the ministry of commerce and industry enhanced the scope of Merchandise Exports from India Scheme (MEIS) and Service Exports from India Scheme (SEIS) with incentives. The government is preparing a new Foreign Trade Policy for 2021-26, and has sought inputs from the industry. 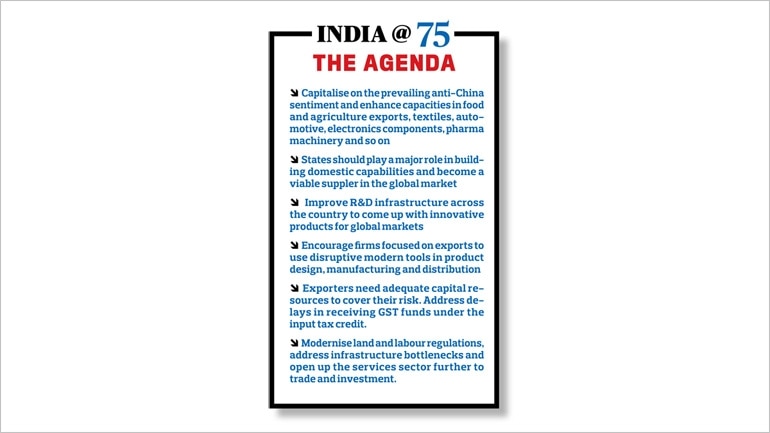 One idea mooted by the industry is offering “plug and play” infrastructure to enable global businesses to set up units in India without having to wait long for approvals. Yet another idea is to create an empowered task force for a joint-industry government initiative in trade. Moreover, India needs to reduce cost of capital and make it more easily available for exporters.