Mood of the Nation poll: How did the government handle the economy? – Nation News

The year 2020 will go down in history as the year of the pandemic and an unprecedented economic crisis. For the first time in four decades, the Indian economy slipped into a recession, with consecutive quarters of negative growth, precipitated by one of the most prolon­ged and stringent lockdowns globally. Manufacturing came to a halt, paralysis struck the services sector, migrant lab­our left the cities, the micro and small ent­erprises lobbied for support to survive.

But nearly a year after Covid-19 disrupted our lives, the economy is limping back to normalcy. S&P Global Ratings has revised its FY21 growth forecast for India to -7.7 per cent, reflecting a ‘faster-than-expected’ recovery in the second quarter.

Despite the economic devastation and unemployment the lockdown inflic­ted, the general perception is that the gov­ernment steered the economy ably through the pandemic. This reflects in the satisfaction expressed by 87 per cent of the respondents in the January 2021 India Today Mood of the Nation (MOTN) poll. Twenty per cent rate the Modi government’s performance as outstanding, 46 per cent find it good and 21 per cent average.

Though this is a fall from the 93 per cent app­roval in the August 2020 MOTN poll, the government’s efforts are seen as positive despite India’s stimulus being conservative among large economies. Economists and industry have been seeking a more aggressive stimulus to stir declining demand, but the government’s focus is still on micro units and people on the margins. The government’s efforts began in May when it announced a slew of measures, including a ‘one nation, one ration card’ scheme that ensured free foodgrains to 686 million beneficiaries, an emergency credit liquidity guarantee scheme sanctioning Rs 2.5 lakh crore to 6.1 million borrowers, an additional outlay of Rs 10,000 crore for the PM Garib Kalyan Rozgar Yojana and a Rs 1.46 lakh crore boost to the manufacturing sector through the extension of the production-linked incentive (PLI) scheme to 10 additional sectors. The schemes are designed towards creating infrastructure, jobs for the most vulnerable, food security and credit access support to MSMEs besides a moratorium on loan repayments. With limited fiscal space to spend, the government, much to the criticism of several economists and policy-watchers, has refrained from putting money directly into people’s hands in the belief that given the uncertainty, they are likely to save than spend. As the government readies to present its budget on February 1, cautious optimism seems to have returned. The Reserve Bank of India has revised its growth projection for 2020-21 to -7.5 per cent from the earlier forecast of -9.5 per cent, since the second half of FY21 is expected to show some positive growth. Interestingly, while 27 per cent of the respondents in the January 2020 survey said their economic status had deteriorated, only 12 per cent say so in the latest poll. Forty-nine per cent of the respondents this time say their economic status has improved, compared to 40 per cent in January 2019. India’s per capita income will go below $2000 (Rs 1,46,000) this fiscal, and economists predict that it may take India three years to return to last year’s levels. RBI data of 2,531 listed firms, private and non-financial, show that staff costs were cut by 3 per cent overall in the April-June quarter. Manufacturing saw double-digit decline.

And although the Modi government has painstakingly tried to shake off Rahul Gandhi’s ‘suit-boot ki sarkar’ jibe, it has failed to fully erase the perception of a corporate bias in its economic policies. Thirty-nine per cent of the respondents say the government’s policies benefit only big business. However, 29 per cent say they benefit both big and small businesses. The Modi government has reduced corporate tax rates to about 25 per cent, brought in the bankruptcy code to allow failed businesses easier exit. 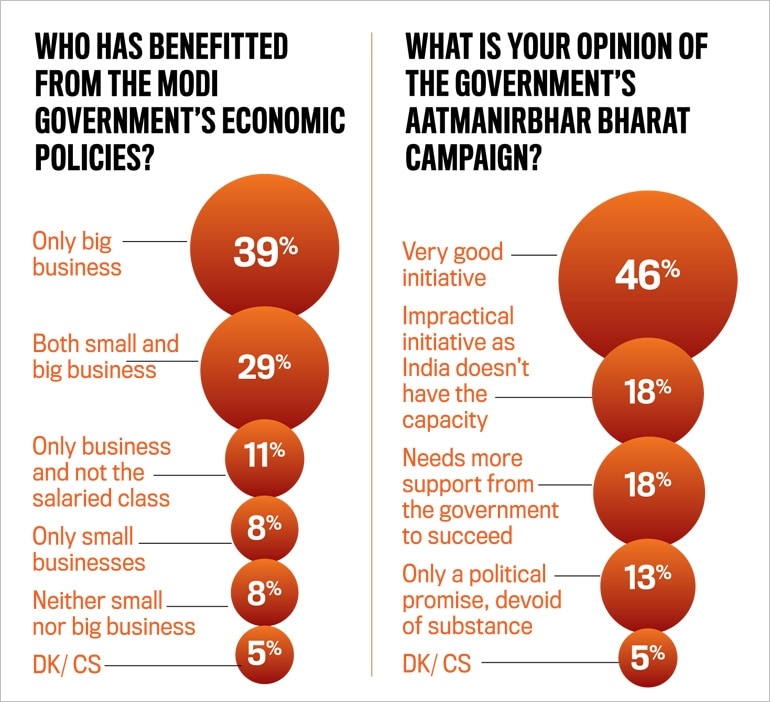 In May 2020, the Centre announced the Aatmanirbhar Bharat Abhiyaan, a Rs 20 lakh crore package (10 per cent of the GDP) to provide relief to those most affected by the pandemic and pump prime growth. The stimulus included the Rs 8.04 lakh crore worth of RBI’s measures to improve liquidity and assist industries and individuals hit by the pandemic. Announced in three phases, the Aatmanirbhar Bharat Abhiyaan measures included Kisan Credit Cards, emergency working capital for farmers through NABARD, government-guaranteed loans to MSMEs, Rs 1.18 lakh crore worth of loans for power distribution companies, Aatmanirbhar Bharat Rozgar Yojana to facilitate job creation and extending the PLI (production-linked incentive) scheme to encourage domestic production of goods.

However, at a time when most MSMEs were struggling to pay sal­aries, repay loans and pay huge power bills despite business coming to a standstill, businesses and individuals were expecting direct relief, not more loans, even if the government was backing them. Forty-three per cent of the respondents say the stimulus has left their economic condition unchanged, 20 per cent say it has worsened while 35 per cent say their economic situation has improved.

However, while not entirely happy with the outcome of the government’s push for self-reliance to reduce India’s dependence on Chinese imports, many laud the sentiment behind Aatmanirbhar Bharat-46 per cent of the respond­ents feel it’s a good initiative. Eighteen per cent dismiss it as impra­ctical, since India does not yet have the capacity to be the world’s supply hub, while 13 per cent feel it’s an empty slogan. Inflation, driven by food prices, has become a matter of concern of late. So far, the RBI had managed to stick to its 4 per cent (+/- 2 per cent) target, but the lockdown upended the entire scenario. Inflation scaled a 77-month high of 7.6 per cent in October, but eased to 6.9 per cent in November. The RBI maintained status quo on interest rates in December, wary of benign rates stoking inflation. The move paid off, with retail inflation at 4.6 per cent in December. Fifty-five per cent of the MOTN respondents feel the Centre has done enough to check inflation. 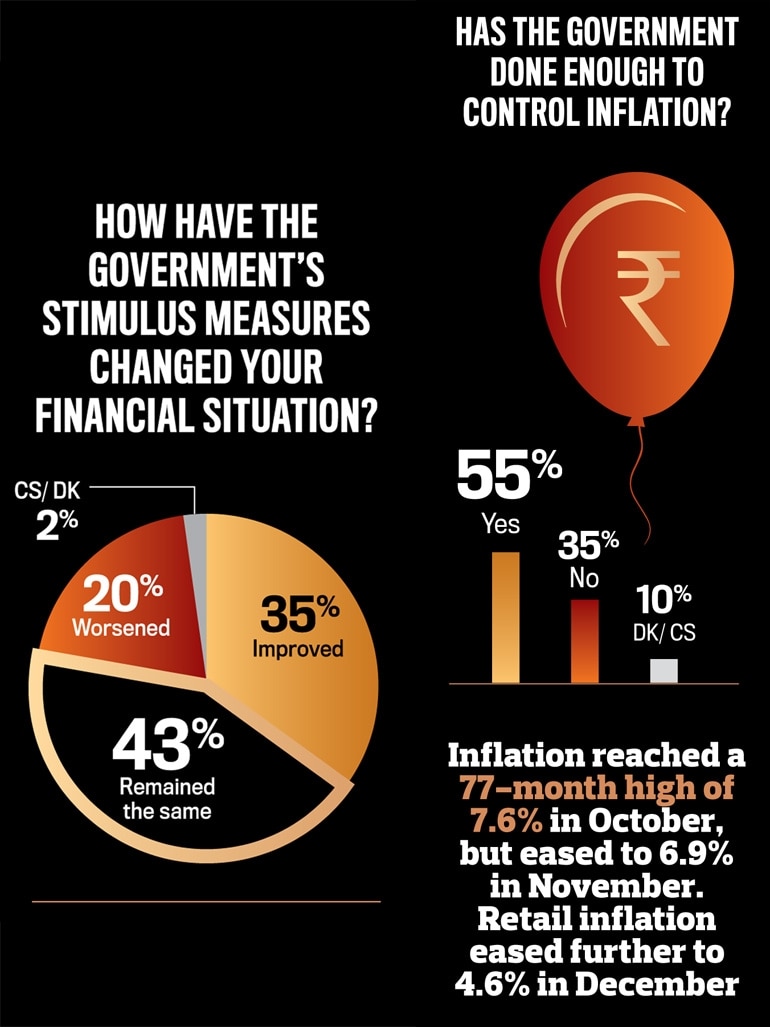 With the spate of debacles in banks and NBFCs (non-banking financial companies), be it Infrastructure Leasing & Financial Services (IL&FS), Dewan Housing Finance Limited, Punjab and Maharashtra Co-operative Bank, Yes Bank or the Laxmi Vilas Bank, the public’s faith in the banking system has been eroded, prompting them to ask: how safe is my bank? Public sector banks, which have Rs 9.4 lakh crore of bad loans, are the most vulnerable. It is not a surprise then that 47 per cent of MOTN respondents want state-owned banks to be privatised, while 39 per cent think otherwise. Last year, an RBI internal working group suggested amending the Banking Regulation Act, 1949, to allow large corporate houses to become bank promoters, a move several experts resisted. The issue is likely to remain controversial in the coming months. Paradoxically, however, 33 per cent of the respondents still prefer to park their savings in bank fixed deposits, with gold as the next best option (18 per cent), and real estate and mutual funds coming in a distant third and fourth among the choices.

The economy is in the process of recovery and, for now, most of our respondents seem content to wait and watch how things unfold. Awaited eagerly is Budget 2021, which will tell us what the government plans to do to lift the sagging mood of the nation.