Let There Be Light – Nation News

In April 2018, the homes in Manipur’s Leisang village were finally electrified-among the last ones of India’s 590,000 villages to get electricity. One could argue that it took over 70 years for the country to take the access to the last man, but a significant milestone had finally been crossed.

India inherited from their British masters the installed capacity of 1,717 MW, mostly through hydroelectric plants. Barely enough to illuminate factories, homes and trading hubs in the cities, electricity was a luxury not a necessity, and extending it to the villages was simply not an option. Today, the country has 375.3 GW of installed capacity-from thermal-based (coal, oil and gas), renewable (hydro, solar, wind) and nuclear energy sources-with roughly 175 GW peak capacity utilisation. Yet, on an average, India faces six to seven hours of load-shedding daily, cross-subsidies continue to make tariff for commercial entities expensive and we lose 26 per cent of electricity generated in line losses (current numbers are higher because of Covid restrictions; the numbers in the previous fiscal were around 18.7 per cent). Despite almost complete electrification, the per capita consumption is still 1,208 units, far less than China’s 5,161 units per person and the US’s 12,997 units. Now, with India pushing for self-reliance and making way for manufacturing, this number is bound to grow. According to the International Energy Agency’s (IEA’s) latest report, India’s per capita emissions is 1.6 tonnes of CO2, well below the global average of 4.4 tonnes, while its share of global total CO2 emissions is about 6.4 per cent. The thermal capacity of 231.6 GW continues to feed the country’s base load requirements and is one of the biggest contributors to these emissions. Over the next five years, India’s biggest challenge would be to not only cut down on these carbon emissions, but to also improve the transmission and last-mile distribution networks. 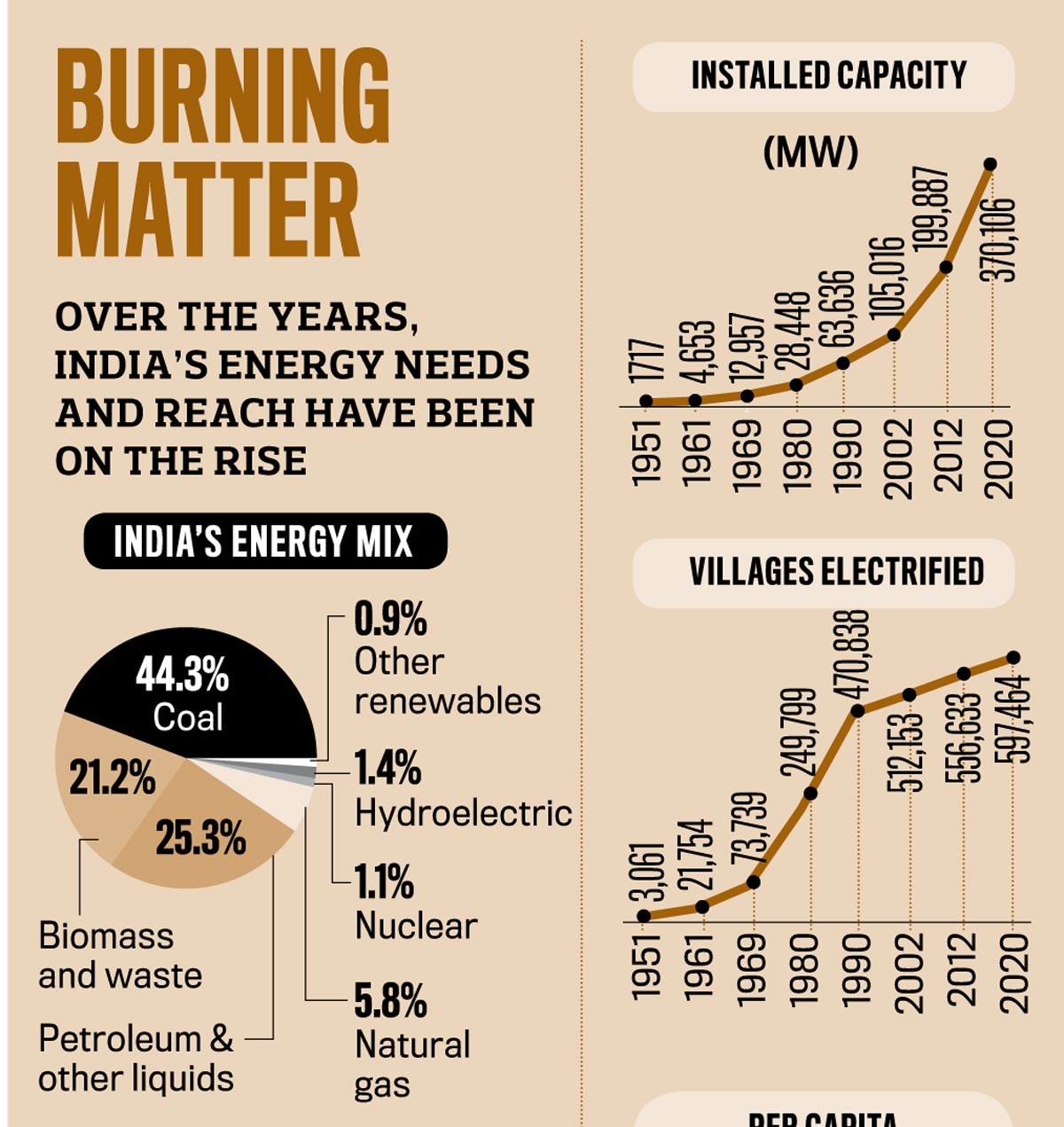 Apart from electricity, India has, over the years, improved the quality of the energy sources to generate heat, move transport and make petrochemicals. The per capita energy use (oil equivalent in kg), as per World Bank’s last report, had improved from 267.34 kg in 1971, to 636.57 kg in 2014, and is estimated to have crossed 900 kg by now. During this time, the country moved from burning farms or waste wood, to kerosene and now LPG for cooking purposes. The statistics published by the Petroleum Planning and Analysis Cell of the petroleum ministry show LPG consumption had increased from 10.6 million tonnes (MT) in FY 2008-09 to 20.4 MT in FY 2017-18. During the same period, LPG connections increased by 287 million, achieving 97.5 per cent penetration. This is in addition to six million piped natural gas consumers in the country. India is working out a plan to shift to cleaner energy sources. A significant number of petrol pumps in the country are already Bharat Standard VI grade fuel with lower levels of sulphur. The nation is also working towards a future with electric vehicles and hybrid (with blended ethanol) fuels. The penetration of piped gas in the 200-odd geographical areas in India will also replace the furnace oil used in factories, diesel and other fuels with gas. India is on its way to increasing the 1,500 CNG stations in the country to 10,000 over the next five years. This would require the country to not only build the pipe infrastructure, but to set its ‘one nation, one gas grid plan’ in motion. This includes increasing the network of pipelines from 17,500 km to 34,500 km, with investments of Rs 4.5 lakh crore. Gas and electricity in the next decade are expected to replace substantial oil consumption. India, at present, consumes roughly 260 MT of crude oil, which is 4.81 per cent of global consumption and third after the US and China.

Meanwhile, to make electricity the more viable option, the country is working on major reforms in the national tariff policy along with amendments in the Electricity Act, which pushes the states and regulators to bring down cross-subsidy charges to 20 per cent of the average cost of purchasing electricity, incentivises states to clean up inefficiencies, promote competition and clean up the books of distribution companies. However, similar efforts in the past two decades have seen limited success. And though these reforms are much needed, the recent resistance to the farm laws have put doubts in the minds of observers.