By 2050, at least 30 Indian cities will face a grave water risk, according to the WWF. The problems range from poor management of water sources, contaminated supplies, leaky distribution networks and vast volumes of untreated wastewater being poured into India’s rivers. In the summer of 2019, Chennai’s reservoirs ran dry, forcing the government to truck in 10 million litres of water a day. For a city that gets an average of 1,400 mm of rainfall a year, more than twice what London receives, this was unprecedented. And not just Chennai, cities across India have been facing acute water shortages due to massive population growth and rapid, unplanned urbanisation. A 2018 study published in Nature projected that by 2050, Jaipur would have the second-highest water deficit in the world, with Chennai at #20. A 2020 report by the World Wide Fund for Nature (WWF) projected that 30 Indian cities would face a ‘grave water risk’ by 2050 due to sharp increases in population. 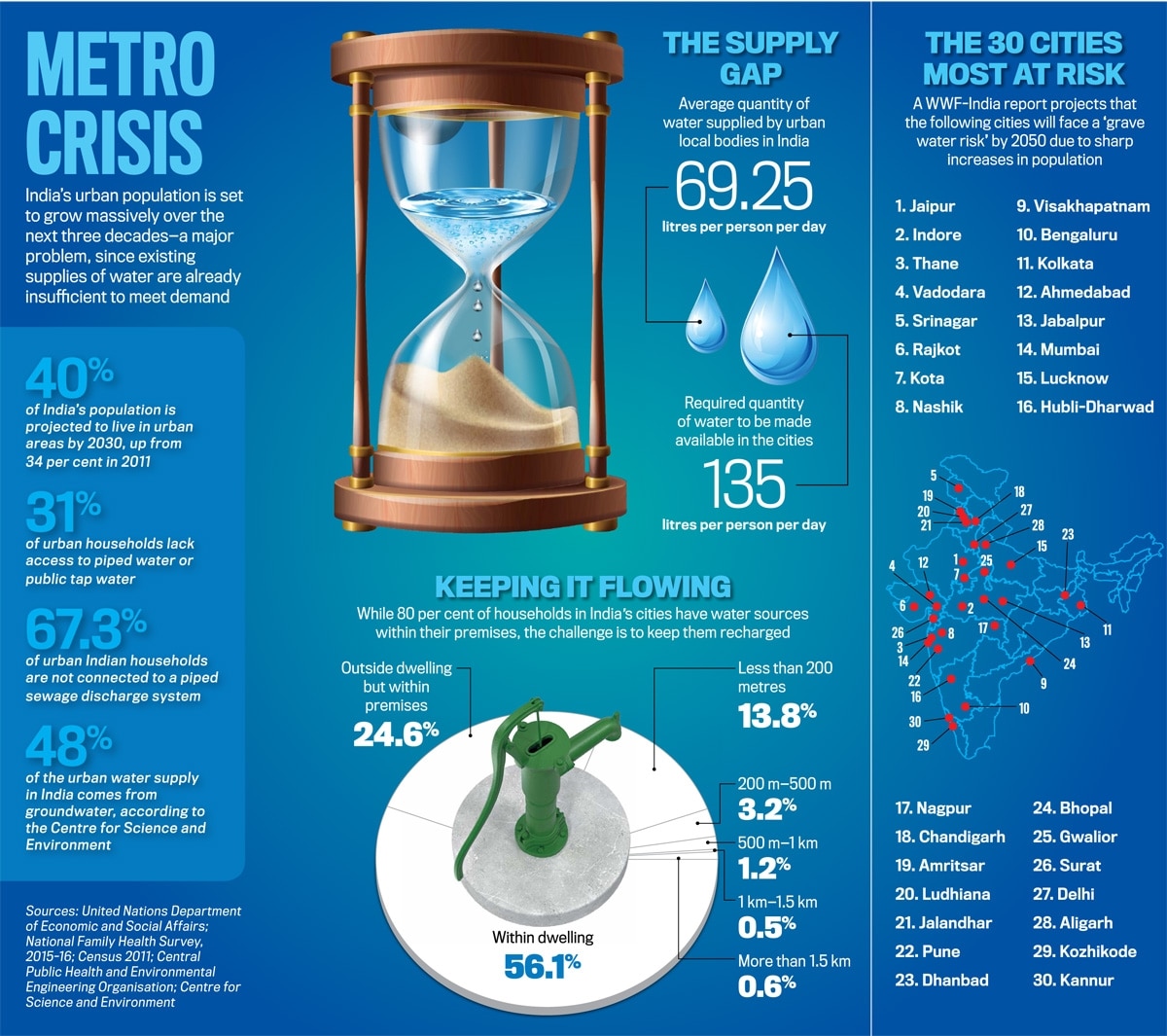 The situation is already alarming. In the 91 most important reservoirs tracked by the Central Water Commission, storage levels have never crossed more than half their total capacity in recent years. More alarmingly, the long-term, indiscriminate extraction of groundwater is making water tables fall rapidly in most Indian cities. According to a study by the Centre for Science and Environment, 48 per cent of India’s urban water supply comes from groundwater, and in seven of India’s 10 most populous cities, groundwater levels have dropped significantly over the past two decades.

Urban dwellers also face a crisis because of limited supply networks. More than 34 per cent of India’s population lives in cities; however, 31 per cent of urban households, mostly those in unauthorised colonies and slums, lack access to piped water or public tap water. And the existing pipes are in danger of running dry. Most Indian cities can’t meet the per capita water supply limit set by the Central Public Health and Environmental Engineering Organisation, 135 litres per day. Even the quality of supplied water has been suspect. Samples collected last year from 21 cities across India failed to meet standards. A NITI Aayog report says that nearly 70 per cent of India’s water is contaminated, impacting three in four people. Responding to the situation, the Union ministry of Jal Shakti launched the Jal Jeevan Mission, aiming to expand the piped water network to all households in India by 2024. However, success depends on the states, as water is a state subject.

While the WWF proposes nature-based solutions and enhancing the health of river basins, watersheds and wetlands to build resilience to water risks, these would tackle only the scarcity issue, not distribution. Another oft-quoted solution is rainwater harvesting, but progress in this has been abysmal. Most experts, therefore, propose an integrated approach, which includes increasing the efficiency of distribution networks and utilising waste water. Since water sources are finite, cities and citizens must focus on efficient and judicious use. That’s the first step towards a sustainable water conservation policy.