September 16 was one of the darkest days of the Covid pandemic in India. The country added 97,655 new cases in 24 hours, pushing active cases to over 1 million. At 5,115,893, India’s total Covid count on that date was the second highest in the world while the number of Covid deaths in absolute figures (83,231) was the third highest.

Social media was abuzz with rumours of a second national lockdown and hospitals began preparing beds for more Covid patients. Treatment options at the time had started reducing as plasma therapy and hydroxychloroquine proved to be ineffective against the novel coronavirus. Doctors had just begun using a combination of steroids and antibiotics, which only later started to show results and save lives. The country has never recorded as many new cases since. 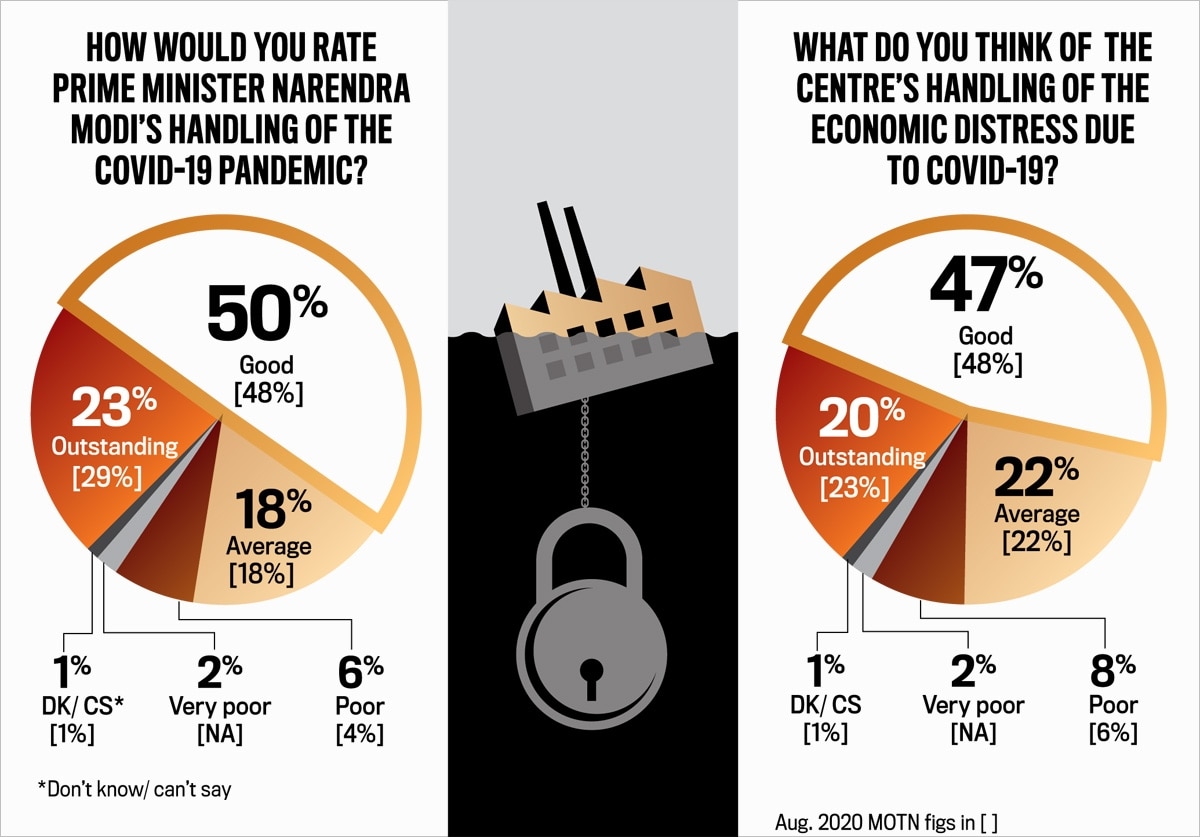 Today, our active cases are only 1 per cent of what they were in September (197,818), with far more people recovering from the virus than those getting infected by it. This means that since January 2021, our active cases are falling even faster. As on January 18, India added less than 10,000 fresh cases. The recovery rate has climbed to 96.6 per cent and the death rate is only 1.4 per cent. Even better, our doubling rate is 482.9 days-a far cry from the days when cases were doubling every three days. No wonder then that the latest india today Mood of the Nation (MOTN) survey has an overwhelming majority of respondents satisfied with Prime Minister Narendra Modi’s handling of the pandemic: 23 per cent found it to be outstanding and 50 per cent good; only 8 per cent rated it as poor/ very poor. Despite the high number of infections during the pandemic, only 7 per cent of the respondents said they or their family members had tested positive for Covid. This holds true with the theory that in a country as large and densely populated as India, a viral attack would naturally infect millions, but since Covid was contained to the larger cities due to the lockdown, the actual percentage of Indians who tested positive was far less. In fact, only 0.7 per cent of India’s 1.32 billion citizens have been found Covid positive.

The same goes for the number of deaths-73 per cent of the MOTN respondents said none of their family members, who got infected, had died due to Covid; only 25 per cent reported losing a near one. “The Covid virus was a new disease and didn’t impact the body in the same way a regular flu does. Doctors had to learn the progression of the novel coronavirus in the body even as cases began to pour in,” says Dr Sandeep Budhiraja, medical director, Max Super Speciality Hospital Saket, New Delhi, one of the first to begin treating Covid with new drugs such as Remdesivir and convalescent plasma. “But eventually, there was a method to how we monitored and treated patients and that made a difference to the number of lives saved. Even today, Covid is largely more harmful for the elderly and those with pre-existing co-morbidities.” 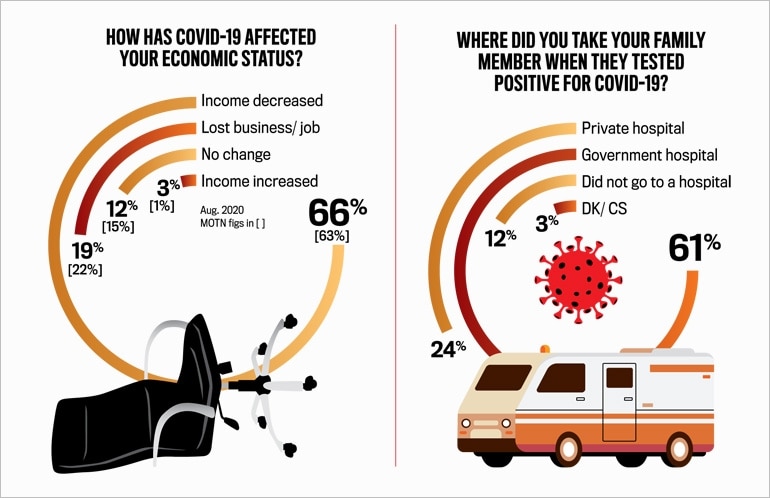 Nearly nine in every 10 people who died from Covid in India were above 45 years of age, according to Union health ministry data. Only 1 per cent of the fatalities were under 17. In many other developing countries hit by the pandemic, particularly in Latin America, it was the young who paid the price. For example, 30 per cent of those who died in Colombia were under the age of 30.

India’s success in controlling fatalities could partially be due to the public campaigns launched to encourage people to wear masks in public and practise social distancing. But it could also be because the disease didn’t really reach areas where public healthcare infrastructure is creaky and citizens have a poor nutritional profile. “There is a theory that perhaps Indians have stronger immunity as they are exposed to more diseases. But equally, Covid remained for the most part a pandemic in the country’s urban areas, where healthcare facilities, connectivity and medicines are available,” says Dr Om Shrivastava, an infectious diseases specialist at Jaslok Hospital, Mumbai.

Interestingly, a majority of Covid patients preferred public hospitals for treatment. Amongst those who got infected, 61 per cent of the MOTN respondents said they went for treatment to a government hospital; 24 per cent opted for private facilities and 12 per cent did not visit a hospital at all. Seventy-six per cent were satisfied with the treatment at the hospital. “The pandemic has certainly reinforced my faith in the public healthcare system. I was treated with utmost care and attention. The food was good, the facilities were good and the doctors were good. Even though I had so much stress being ill and away from my family, the hospital staff helped me relax with their assurances and advice,” says Rohit Dutta, who in March 2020 became Delhi’s first Covid patient after his return from Italy.

With the spread of Covid slowing down, 39 per cent felt it was due to the national lockdown, which had restricted the movement of millions for months. Another 28 per cent felt that while the lockdown helped contain the spread, it caused a lot of hardships. Ten per cent felt it had adversely impacted the economy. Clearly, most of the problems faced at the time were economic as many lost their jobs or were forced to work at reduced pay. 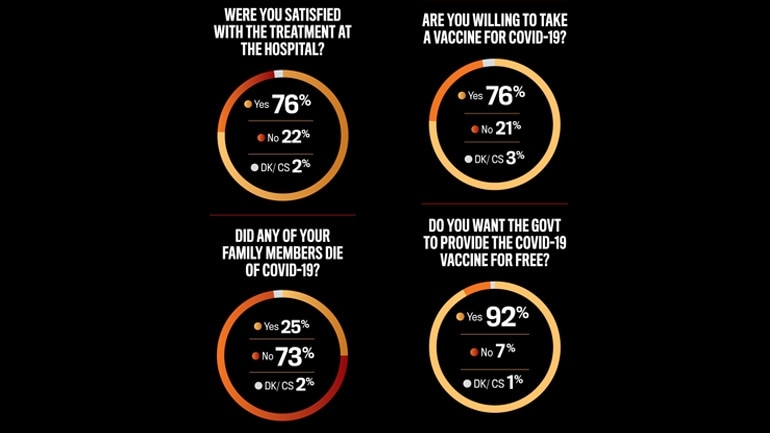 Certain industries, such as food, hospitality and aviation, bore the maximum brunt and took longer to adapt to Covid. They are yet to recover from the impact of the pandemic. Around 66 per cent of the respondents-3 percentage points more than the last MOTN in August 2020-reported reduction in income while 19 per cent said they had lost their jobs or business, marginally better than the score last August (22 per cent). Only 3 per cent said their income had increased (up from 1 per cent in the previous MOTN).

“I know Covid impacted many negatively. But my business thrived and now I have enough money to buy myself a car,” says Swati Narula, a 29-year-old interior decorator from Mumbai. Indeed, Covid saw hundreds reach out for creative home décor as people adapted to the work from home model. Overall, a majority of the respondents (67 per cent) believed the central government’s handling of the economic distress from Covid was outstanding or good. About 22 per cent found it to be average and only 10 per cent felt it was poor/ very poor.

As the Covid vaccination programme rolled out across the country on January 16, it is interesting to note that a majority of the MOTN respondents not only wanted the vaccine to be administered for free (92 per cent) but were willing to take the jab (76 per cent). However, at present, there remains a problem of vaccine hesitancy in the country, with only 64 per cent of the intended beneficiaries getting themselves inoculated as on January 19. On January 18, only eight people arrived at AIIMS Delhi for the shot even though the hospital was prepared to vaccinate hundreds.

Even as top doctors and public health officials took the vaccine to build public confidence, scepticism prevails, fuelled by growing rumours and misinformation online. “Both vaccines available in India are time-tested methods of immunisation. Their efficacy might be up for debate, but certainly no country will put out an unsafe vaccine. The risks are too great,” says Virander S. Chauhan, scientist at the International Centre for Genetic Engineering and Biotechnology, New Delhi.

Social media rumours could be one of the reasons why PM Modi made it a point to reiterate the safety of the vaccines. In his address to the nation, he specifically asked people not to pay attention to fake news. He also explained the rationale behind picking domestically manufactured vaccines for immunisation of Indians. Indian vaccines, he said, are much cheaper than foreign options and more conducive to the country’s conditions. “There are vaccines abroad whose single dose costs up to Rs 5,000 and they have to be stored in freezers at minus 70 degrees. India-manufactured vaccines are best suited for us,” Modi said. Given the implicit trust in the prime minister and his handling of the pandemic, his motivation for taking the vaccine could well be enough to see a higher turnout in the weeks ahead.