On the surface, the assembly election in Assam, to be conducted in three phases, on March 27, April 1 and April 6, looks like a three-cornered contest. The ruling Bharatiya Janata Party-Asom Gana Parishad (BJP-AGP) alliance is pitted against a grand alliance of eight parties, the Congress, the All India United Democratic Front (AIUDF), the Bodoland People’s Front (BPF), the Anchalik Gana Morcha, the CPI, the CPI(M), the CPI(ML) and the Rashtriya Janata Dal, and a smaller potential alliance of two new parties, the Raijor Dal (RD) and the Assam Jatiya Parishad (AJP). But there are all sorts of undercurrents that will determine the final winner on May 2. 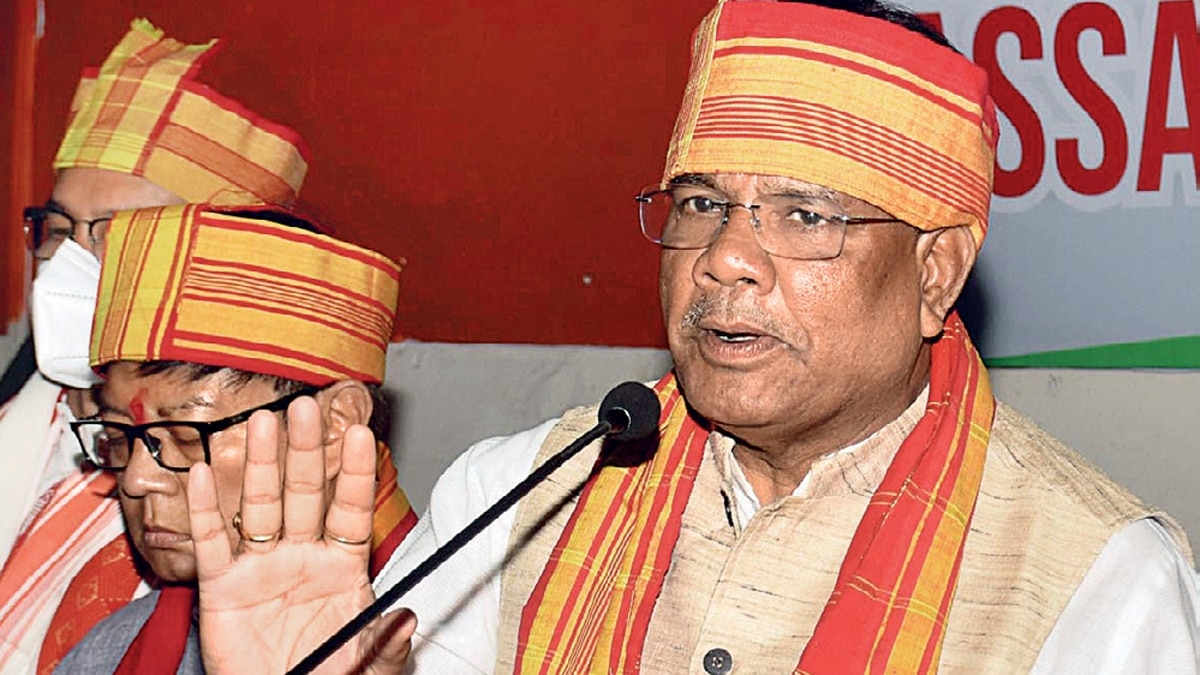 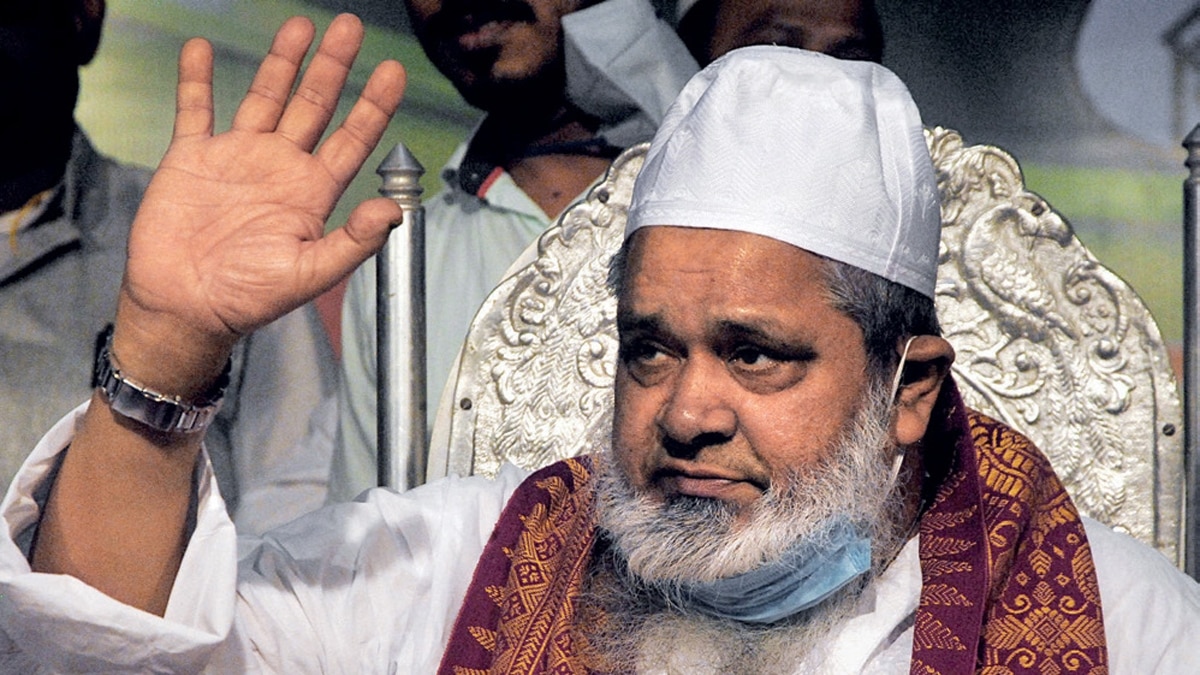 Take the case of the Congress-led alliance. They tried hard to avoid a split in the Opposition votes, which is why Congress leaders kept trying, even after repeated rebuffs, to persuade the RD and AJP to join and strengthen the Opposition grand alliance. If they had joined the alliance, it would have resulted in a bipolar fight between the BJP-led alliance and the Congress-led one. The urgency to consolidate all non-BJP votes can be understood from the fact that in 2016, the Congress won just 26 seats despite having a 31 per cent vote share, higher than the BJP’s share of 30 per cent. The alliance between the BJP, the AGP and the BPF had consolidated all anti-Congress votes, giving the BJP 60 seats, the AGP 14 seats and the BPF all 12 seats from BTAD (Bodoland Territorial Area Districts) areas. 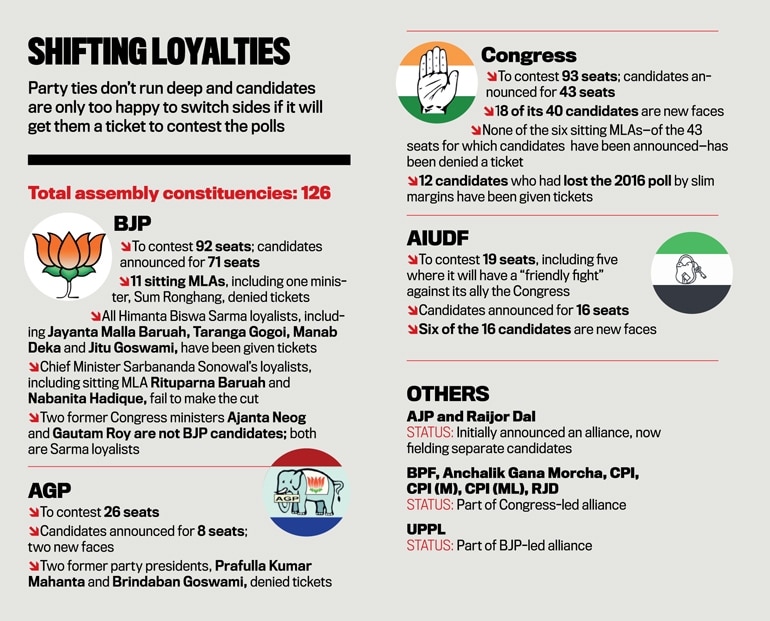 This time, the BJP has tied up with the newly formed UPPL (United People’s Party Liberal), which will contest eight of the 12 seats in BTAD areas while the saffron party will contest the remaining four. The BPF, as part of the Congress-led alliance, will contest all 12 BTAD seats. In 2016, the Bodo votes in the region, which has a significant Muslim population, remained consolidated under the BPF while the non-Bodo votes were split between the Congress and the AIUDF, a party that represents the interests of the Muslims of immigrant origin in Assam.

This election is likely to see the Bodo vote split between the BPF and the UPPL, while non-Bodo votes, particularly from Muslims, will likely go to the grand alliance. This trend was witnessed in the recently held elections to the Bodo Territorial Council, which governs the BTAD. Though the BJP-UPPL combine won the polls, it was only able to reduce the BPF’s earlier tally of 20 by three seats, because Muslim voters in the region backed the BPF to prevent the BJP-backed alliance from coming to power. With the BPF joining the Congress-AIUDF+ alliance, the unification of non-Bodo votes could be near-complete.

However, all these electoral projections may remain mere possibilities. For instance, though the Congress-AIUDF combine has the potential to secure wins in at least 46 seats, the list of candidates declared so far does not indicate a coherent strategy for it. The Congress will contest 93 seats while the AIUDF has been allotted 14 seats. However, the Badruddin Ajmal-led party has fielded candidates in five more seats in a ‘friendly contest’ against the Congress. This when the Congress curren­tly occupies four of these five seats. Congress insiders say the AIUDF is working with the BJP, taking directions from state finance minister Himanta Biswa Sarma. They claim the public spat between Sarma and AIUDF chief Ajmal is to consolidate their respective vote banks, and that they are working tog­ether behind the scenes. “This ‘friendly contest’ is suicide,” says a senior Congress leader. “That’s why we had opposed an alliance. The AIUDF is working with the BJP to [prevent] the consolidation of the anti-BJP votes in lower Assam and the Barak Valley.”

In Assamese-dominated seats in upper Assam, the Congress expects to gain from the resentment against the BJP for passing the Citizenship (Amendment) Act, 2019, which voters fear will benefit illegal immigrants. However, they may not see the Congress as a viable alternative due to its alliance with AIUDF, which is seen to be protecting illegal Muslim immigrants. The two new parties, the RD and the AJP, are seeking to present themselves as a third alternative. Their refusal to join the Congress-led alliance will now ensure either a three- or four-sided contest in 29 of the 36 seats dominated by Assamese speakers, indirectly helping the BJP.

The RD and the AJP had initially announced that they would contest together, but the alliance broke down even before it was formalised on paper. In at least 10 constituencies, the two parties have fielded separate candidates, preparing the ground for a further division of opposition votes. This move starkly contrasts with a letter RD chief Akhil Gogoi had written to all opposition political parties in the first week of March, urging them to field only one joint candidate in all constituencies against the BJP. However, in the letter, Akhil described the AIUDF as ‘communal’ and blamed the Congress for giving it a new lease of life. ‘If we take them along with us, we will be weakened ethically, ideologically and politically’, he wrote. The letter found some takers in the Congress. “There is merit in Akhil Gogoi’s suggestion. But the decision rests with the high command. The AIUDF also needs to look into its characteristics. If there is no BJP, there may be no AIUDF,” Congress leader Debabrata Saikia says. However, the collective leadership of the Congress chose to ignore the letter. “What is the harm in aligning with the AIUDF? They are not unconstitutional. How can you say they are communal? If you respect your own religion, you are not communal,” says Assam Congress president Ripun Bora. In fact, several Congress leaders expressed reservations about the letter as Akhil Gogoi’s criticism of the AIUDF resonated with the campaign slogans being used by Sarma, the BJP’s chief strategist in Assam, who has been projecting Ajmal and immigrant Muslims as a major threat to the state.

Some RD members say the inherent contradiction in Akhil Gogoi’s letter, asking all opposition parties to be united and then criticising the AIUDF, and the subsequent breakdown of the RD-AJP alliance hint at a “political game controlled by bigger forces”. Hiren Gohain, a noted intellectual and one of Akhil Gogoi’s mentors, has dissociated himself from the RD leader. “Akhil’s opposition to the BJP is a façade. He has aligned with Sarma for a beneficial political future. Maybe the long jail stint has made him desperate,” says a senior leader and long-time associate of Akhil Gogoi.

BJP insiders acknowledge that the party’s entire election campaign revolves around Sarma’s popularity and backroom manoeuvring. The finance minister, who has been in govern­ment for the past 16 years, 11 in the Tarun Gogoi-led Congress government and five in the Sarbananda Sonowal-led BJP government, has friends in every political party in the northeast. This network has helped him stitch together winning coalitions, form governments without having a majority in the house and prevent governments from falling. Sarma’s influence within the party was visible in the announcement of candidates for 70 seats. All his loyalists, including new faces such as Manab Deka, Taranga Gogoi and Jitu Goswami, have been given tickets. Another close associate, former MLA Jayanta Malla Baruah, who did not get a ticket for the 2016 assembly poll or the 2019 general election, also made the cut. “The name of the party should be changed from BJP to HBS (Himanta Biswa Sarma),” says a sitting MLA who has been asked to sit out this time.

This has also led to speculation that if the BJP wins, there may be a change of guard in the state. Unlike in 2016, the BJP has not declared a chief ministerial candidate this time. Besides, not a single loyalist of chief minister Sonowal has found a place among the 71 candidates fielded till now. In fact, two sitting MLAs close to the chief minister, Rituparna Baruah and Nabanita Handique, have had to sit out.

Sarma’s ambition to become the chief minister is an open secret. In fact, he left the Congress in 2015 after Rahul Gandhi refused to back him for the post, even though 52 of the 78 Congress MLAs had said in writing that they wanted Sarma to replace Gogoi. Sarma’s departure from the party reduced the Congress tally to 26 while the BJP’s tally jumped from five to 60. That’s why the BJP’s central leadership, despite not making a commitment to Sarma, has given him a free hand in planning and executing the election strategy in the state.

The veteran of many elections, however, dismisses any speculation about a possible elevation. “All the BJP workers, including me, are collectively focused on increasing the victory margin. As per the Constitution, the chief minister is chosen by the parliamentary party. That will happen after the election results are out,” says Sarma. While other parties are struggling to work out internal frictions before the polls, the BJP’s battle may begin after May 2.