Beyond the Gandhis – Nation News

On January 3, 2014, facing flak from the media and the Opposition on many issues, including corruption, then prime minister Manmohan Singh said: “I honestly believe that history will be kinder to me…given the political compulsions, I have done the best I could do.” In May that year, he was ousted from power, and his party, the Congress, sank to a humiliating low, winning just 44 seats in a Lok Sabha which has 543 members. 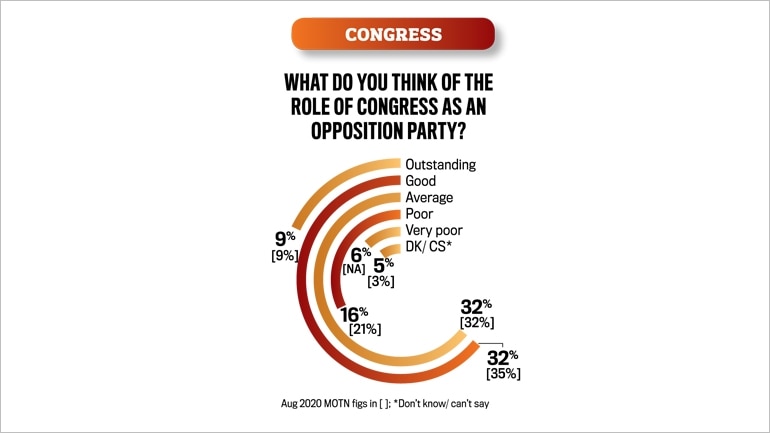 Almost a decade later, the general public, at least, seem to have a kinder view of the former prime minister. In the latest edition of the India Today Mood of the Nation survey, 16 per cent respondents see him as the “best suited” leader to revive the Congress, a party which currently accounts for 54 members in the lower house and is in power in just five states-three on its own and two in a coalition. It’s ironical that the octogenarian leader has emerged as the biggest hope to instil life in the grand old party, now seemingly on its deathbed. What makes this result more significant is that, for the first time in the history of MOTN surveys, a non-Gandhi has been backed by people to lead a Congress fightback. While his trusted lieutenants have already begun a campaign to instal Rahul Gandhi as the next party president, the support for his leadership has seen a drastic decline in the past six months (down from 23 per cent in August 2020 to 15 per cent now). 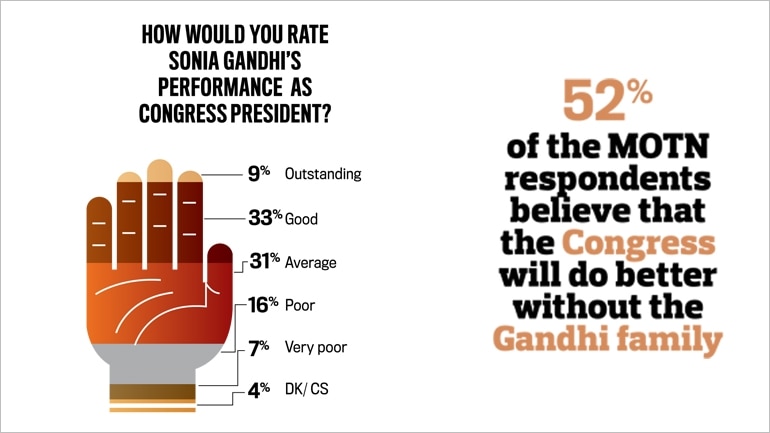 The results reveal that the multiple reinventions of the Gandhi scion have failed to find resonance among the general public. There is no doubt he has been the only national leader to relentlessly take on Prime Minister Narendra Modi and the BJP on issues, primarily on social media platforms and occasionally by taking to the streets. He has questioned the government on its preparedness and strategy to tackle the Covid-19 pandemic and combat Chinese aggression on the border. He was perhaps the most visible Opposition leader during the lockdown-having video conversations with global experts, holding press conferences and sitting down on pavements to talk with the migrants.

Yet, his political moves-or antics as critics call them-have not created the public discourse the party expected. It once again reflects poorly on him that he is still not considered a serious politician by the masses, a perception created by the BJP’s social media campaigns and his own actions. For instance, just two days before the foundation day of the Congress in December 28, he flew out of the country, reportedly to see his ailing grandmother in Italy. “There is nothing wrong in going to visit his grandmother. But he could have done the same after two days. It’s all about political optics and he is always wrong on that. What’s worse is that he doesn’t want to learn,” says a Congress CWC member.

It’s not just Rahul, even the other two politically active Gandhis-Sonia and Priyanka-have failed to inspire as their significant drop in the rankings show. Indeed, 52 per cent respondents believe the Congress will do better without the Gandhi family. Once again, this is an unprecedented finding in the MOTN survey history as majority of the respondents earlier refused to show faith in a non-Gandhi leadership. If Manmohan Singh has pipped Rahul to the top position, another surprise is Sachin Pilot with 12 per cent respondents backing him as the leader to revive the Congress, placing him above Sonia Gandhi and Priyanka Gandhi. And that is a reminder for the family to project a singular leadership, instead of making party workers shuttle between the three Gandhis for finding resolution even to a small crisis. Together, the Gandhi family-Sonia, Rahul and Priyanka-is backed by 35 per cent respondents, far ahead of Manmohan Singh. 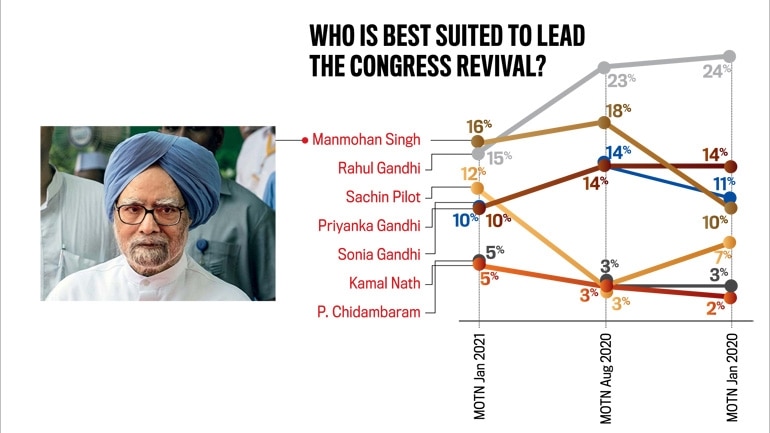 In fact, among the non-Gandhis, Manmohan Singh and 43-year-old Pilot have emerged as the top two leaders to lead the Congress. This is a clear hint to the party to look beyond the family and utilise the wisdom of the veterans and the energy of the youth, instead of indulging in old vs young mud-slinging as was seen in Rajasthan between Pilot and Rajasthan chief minister Ashok Gehlot. Such infighting between Jyotiraditya Scindia and the Kamal Nath-Digvijaya Singh duo in Madhya Pradesh resulted not only in the exit of Scindia but also cost the party the government in the state. 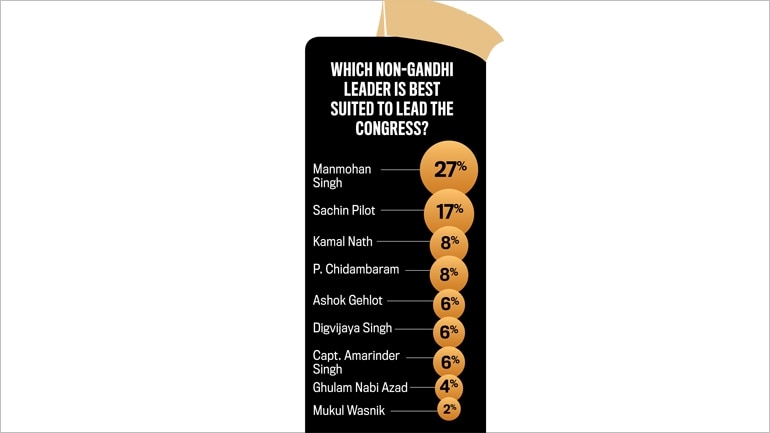 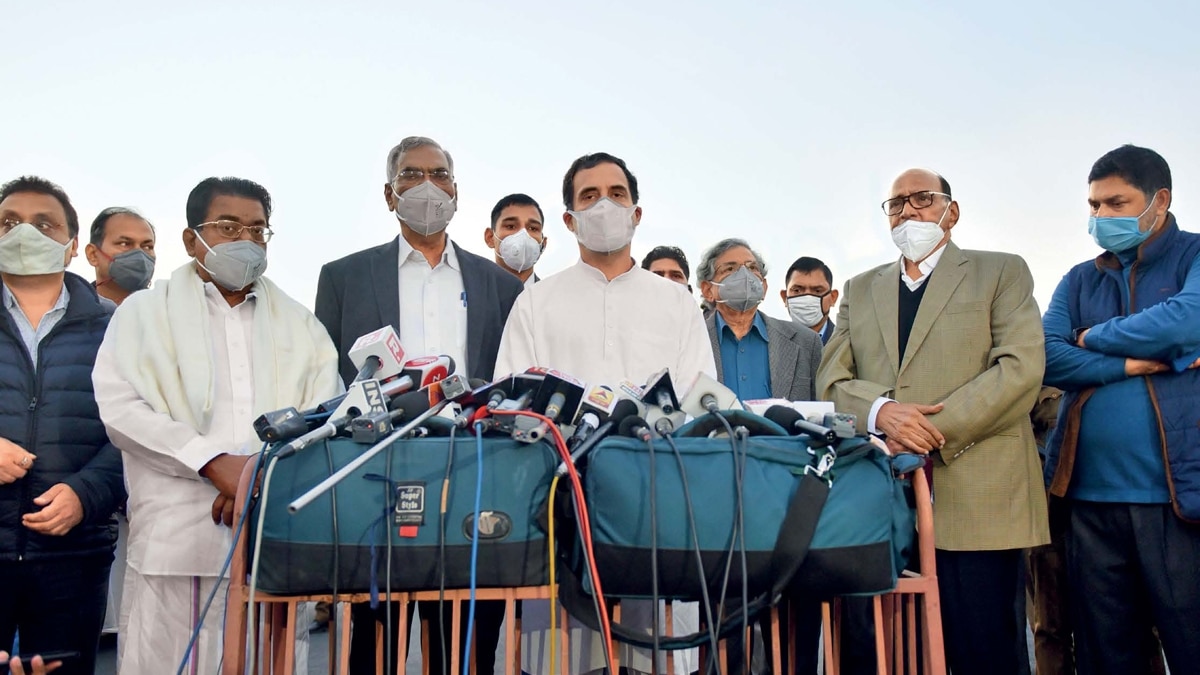 Faces of opposition: Rahul Gandhi and other Opposition leaders address the media after meeting the President to seek a repeal of farm laws, Dec. 9 (Photo: Chandradeep Kumar)

While the Congress is fighting an existential battle, the other parties in the Opposition ranks, hampered as they are by regional focus and a lack of reach, too cannot be expected to weave a national discourse against Modi and BJP. The pandemic-induced lockdown also forced most Opposition leaders to either stay away from public interactions or restrict themselves to social media. The occasional rants, also did not inspire many as half the respondents say the opposition was criticising the Union government just for the sake of it. The results of the Bihar assembly election-BJP-JD(U) alliance scraping through against an RJD-Congress-led grand alliance-ended any chance of a consolidation in the past six months. Yet, a non-BJP, non-Congress Opposition leader has shown that a fightback is possible against the BJP’s singular domination of Indian politics. With two consecutive, comprehensive victories against the BJP’s famed electoral machinery, Delhi chief minister and Aam Aadmi Party leader Arvind Kejriwal has shown that he has the mantra to combat the saffron party in elections. With a blend of governance, populism and soft Hindutva, he has successfully countered BJP’s lethal communal polarisation strategy. In the MOTN survey, 18 per cent respondents backed him to lead a non-Congress, non-BJP alliance. That’s a signal to Opposition veterans to recalibrate their brand of politics in the changed political environment of the country.

J.P. Nadda has had a smooth run as BJP president so far, and Amit Shah emerges as the next big hope after Modi

When J.P. Nadda took over as the BJP president a year ago, many believed he would be a token president while the real control would remain in the hands of the formidable duo of Prime Minister Narendra Modi and Union home minister Amit Shah. In fact, critics contended that Nadda was chosen as he was perceived to be someone who was ready to work in the shadow of Modi and Shah. His innings also started with a setback-the saffron party’s humiliating defeat in the Delhi assembly poll.

However, a year later, Nadda has not only emerged out of the shadows but also developed his own style of functioning-accessible and gentle, yet unwavering when it comes to organisational decisions. Undoubtedly, Modi-Shah still have overriding influence on party affairs and policies, but Nadda has managed to carve a niche for himself, particularly in terms of his attention to detail in organisational and strategic planning. From last year’s Bihar assembly election to preparing for the upcoming elections in five states-Assam, West Bengal, Tamil Nadu, Puducherry and Ker-ala-Nadda has been hands on and leading from the front, even setting the narrative at times. 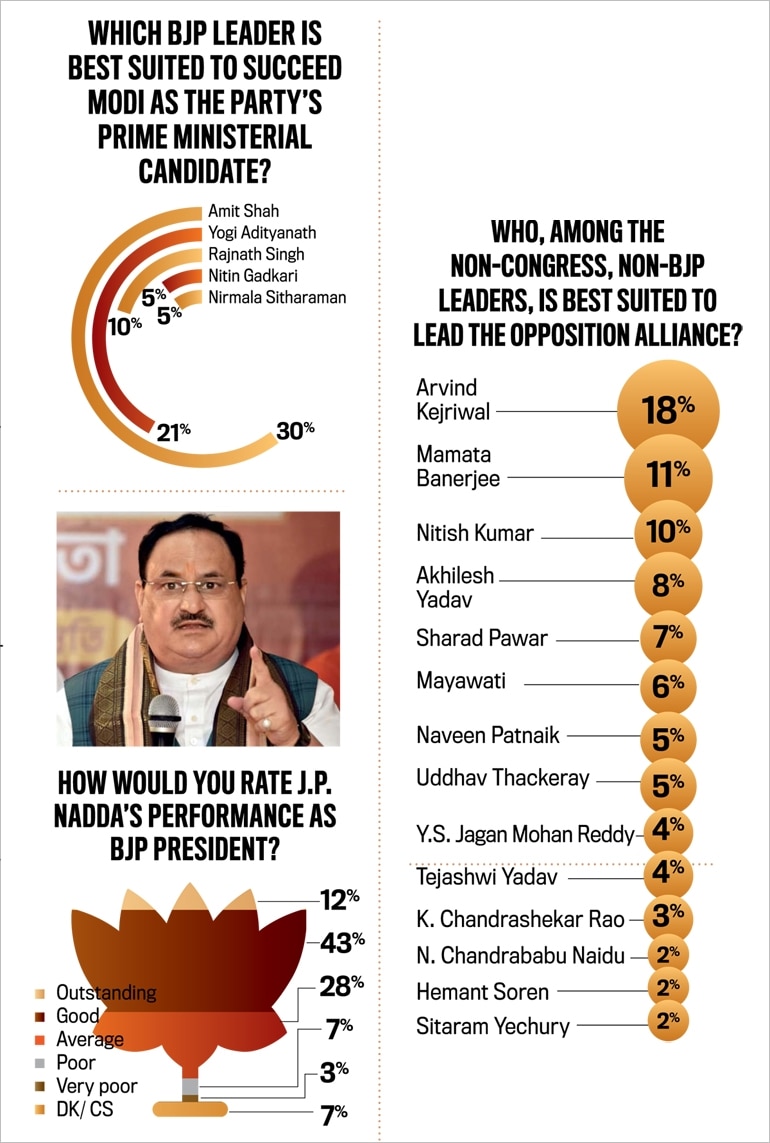 His presence has been noted even by the Opposition forces, as was evident when his convoy was attacked in West Bengal, a state that will severely test his organisational skills in the next four months. No wonder then that 55 per cent of the MOTN respondents rate his performance as party president as good or outstanding.

Meanwhile, Shah, the prime minister’s most trusted lieutenant, retains his position as the most acceptable inheritor of the PM’s legacy. During Modi’s first term, he took charge of the BJP’s expansion plan, ensured victories in multiple assembly elections, particularly in states such as Uttar Pradesh and in Assam, where the party was not a strong force. In Modi’s second term, Shah entered the realm of governance, driving several bold and controversial decisions such as the abrogation of Article 370 in Kashmir and passage of the Citizenship (Amendment) Act, 2019. At the same time, he worked behind the scenes to engineer the installation of a BJP government in Madhya Pradesh and Karnataka, even if it meant poaching MLAs from other parties. During the pandemic, the home ministry under him has remained the nodal ministry in the country’s fight against the coronavirus. With Shah’s imprint all over the BJP-led NDA government and given his electoral abilities, it’s hardly surprising that 30 per cent respondents view him as the leader best suited to succeed Modi as the party’s next prime ministerial candidate.