A tough road ahead – Nation News

For Muthuvel Karunanidhi Stalin, who turns 68 on March 1, this will be the ultimate challenge of his career. If he and his party, the Dravida Munnetra Kazhagam (DMK), fail to dislodge the All India Anna Dravida Munnetra Kazhagam (AIADMK) in the Tamil Nadu election this time too-the latter has been in office for a decade-Stalin’s hopes of occupying the coveted chief minister’s seat in Fort St George (the seat of the state administration) may be lost forever.

For the DMK, the sweeping victory in the 2019 Lok Sabha election (the party-led alliance won 38 of the 39 seats) came as a welcome boost in its preparations for the 2021 assembly poll. Despite the pandemic, Stalin has not let go of the momentum. He has been video-conferencing with party cadre and has also been holding all-party conferences and physical protests over select issues. The party has also reorganised the district committees, bifurcating some to make them more manageable and giving responsibility to more second- and third-tier leaders to energise the party in the districts. The election of Durai Murugan, 82, as party general secretary to replace the late K. Anbazhagan may have also put possible intra-party rumblings to rest.

The DMK faces a few challenges, though. The first is the problem of underestimating the Edapaddi K. Palaniswami (EPS)-led AIADMK and the groundwork the ruling party has done. With its allies, there are seat-sharing concerns, and within the party, there is dissent to manage. There’s also the internal challenge from within the DMK first family, second-guessing the moves of his rebel half-brother M.K. Azhagiri, 69, and keeping critical control over the extended family. Another deterrent is that the DMK remains top heavy with a bunch of ageing, leaders who have little connect with voters or issues.

The DMK’s advantage is the anti-incumbency AIADMK faces after 10 years in power and the fact that unlike Stalin in the DMK, apolitical voters will have to be convinced that EPS and his deputy O. Panneerselvam (OPS) will not be fighting among themselves after the polls. The DMK does not have any visible weaknesses right now, but problems could evolve once seat-sharing with allies and candidate selection begins.

The allies will be the same as in 2019, with the Congress, VCK (Viduthalai Chiruthaigal Katchi), MDMK (Marumalarchi Dravida Munnetra Kazhagam), CPI, CPI(M), the IUML (Indian Union Muslim League) and a few other minority-based parties. The 2019 election victories produced MPs from many allies, whose parties will now demand a proportionate number of seats. This will be true of the Congress more than others, given the various factions and aspirants. Allies like Vaiko’s MDMK and Thol Thirumavalavan’s VCK will want as many seats as they can get to be able to save their election symbol post-poll. Considering the challenge of letting minor allies contest on their own, the DMK had talked the two parties into contesting on its Rising Sun symbol in the 2019 Lok Sabha election. They won.

“Seat-sharing itself may be a drawn-out affair, particularly with the VCK, which has some grassroots base,” says Prof. Ramu Manivannan, head, department of political science and public administration, University of Madras. This time, the allies are also eager to contest on their own symbols. This could be a problem, but there is little chance that the DMK will yield much ground, especially in the absence of Karunanidhi. Apart from organisational ambitions, the DMK has to convince its voters that they will be able to form a single-party government, which alone in the Tamil Nadu context signals a stable government.

A real stumbling block may emerge if the DMK seeks to put Stalin’s son Udhayanidhi in the limelight, even if only to share his campaign burden. The AIADMK and other rivals are already pitching on the development versus dynasty rhetoric to run down the DMK. “A lack of innovation and appropriate political response to the challenges thrown up by the BJP and AIADMK are also weaknesses,” says Manivannan.

Stalin has been the party leader for all practical purposes for the past 20 years. As chief minister, Karunanidhi still held sway till 2011, when the party lost the assembly poll. At the organisational level, especially in the appointment of office-bearers and nomination of DMK candidates for various elections, Stalin has been running the show since the 2001 assembly poll. He also held most of the negotiations with allies and took the decisions, which Karunanidhi endorsed. Stalin has been a minister and was deputy chief minister for five years (2006-11). He has always kept a team of party veterans as the mainstay of his decision-making, with inputs from friendly sources since 2011, says political commentator N. Sathiya Moorthy. 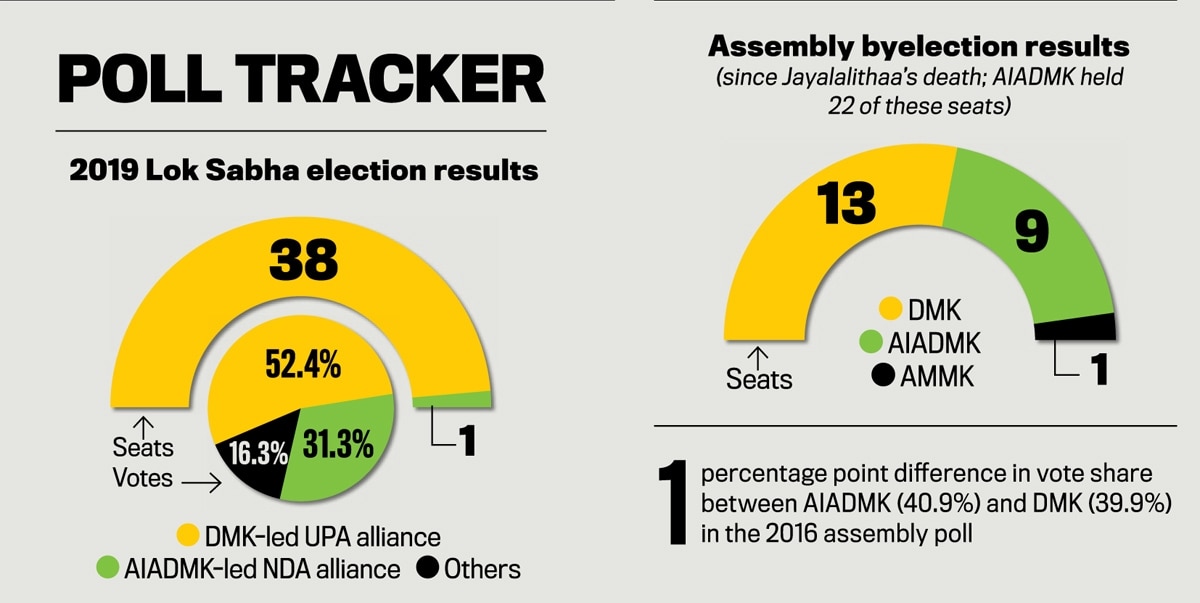 As of now, there is nothing distinct about Stalin’s campaign. His village panchayat strategy-a throwback to 2016, when Stalin travelled across the state, meeting specifically with the youth-is still popular, drawing large crowds. That did impress the youth, as the results showed. The DMK alliance had the highest ever tally-98 of 234 seats-for a losing combine in Tamil Nadu. His campaign so far seems to depend more on anti-incumbency against the AIADMK, the purported infighting between EPS and OPS, and the various charges of corruption that have been making the news.

Inputs from Kishor’s I-Pac team go directly to Stalin while the party mostly draws and executes the campaign strategies. Indications are the I-Pac team will stay in the background as the DMK may not want to give the impression that the campaign was “stage-managed” by professional campaigners. Such a sentiment could boomerang for both the DMK and AIADMK as a section of the voters, especially the elderly, have come to brand them as koothadi (puppet dancer) parties disconnected from ground realities.

“Although it has hired Kishor for the campaign, the emphasis on Dravidian identity and defending state interests are the twin pillars of DMK’s strategy this time. The DMK campaign will revolve around the performance of the AIADMK government in terms of Centre-state relations and surrendering of state rights,” says Manivannan. Party insiders argue that Stalin would do much better if he goes back to the traditional campaign methods instead of “the excessive reliance on I-Pac, which is cutting critical links between Arivalayam (the party HQ) and the districts and grassroots”.

Another challenge is Azhagiri, and this is despite the DMK handling the post-Karunanidhi succession efficiently in comparison to the AIADMK, where the shadow of the late J. Jayalaithaa’s aide V.K. Sasikala, who is due for release from jail later in January, is still cause for worry. Azhagiri is threatening to disrupt the DMK if his son is not accommodated in a respectable position in the party. He has clout in the southern districts of the state and has hinted at launching a party in the name of his father that will align with the BJP.